HomeNewsVillage Green Apartments to put out smoke with no smoking policy 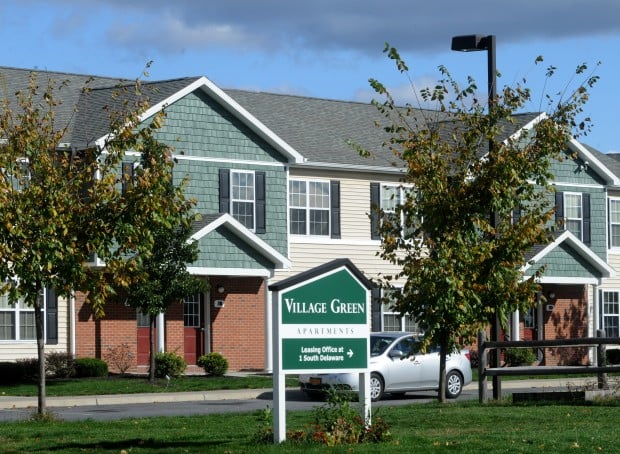 New rules, which take effect Jan. 1, prohibit smoking within apartments, in common areas, within 50 feet of entrances, or anywhere else on the property.

“This is an act (which), when discovered, will result in eviction,” the rules state.

Carrying of a lit cigarette, cigar or pipe also is prohibited anywhere on the property.

“It reduces destruction to the property related to nicotine deposits. It prevents fires. The overall health of our residents is a concern, as well,” said Cindy Irizarry, operations manager for the New York region for Preservation Management, the company that manages the 136-unit apartment complex between Hudson Avenue and Broad Street, near Glens Falls Hospital.

The action at Village Green is part of a national trend the federal Department of Housing and Urban Development began pushing in 2009, said Janine Stuchin, director of the Southern Adirondack Tobacco Free Coalition, an advocacy organization working with the Village Green management on the initiative.

Maine has banned smoking in all public housing complexes in the state, Stuchin said.

The Boston Housing Authority, the largest public housing authority in New England, recently banned smoking at all of its properties.

At Village Green, the process of enacting the ban has been going on for about a year, Stuchin said.

The new rules were presented to tenants in conjunction with a change in utility costs, and tenants signed statements that they were aware of the new rules, she said.

Signs have been posted encouraging tenants to stop smoking, and the coalition and Glens Falls Hospital have conducted several meetings to inform residents about a state program that assists people who want to stop smoking.

The two-week supply gives people enough time to save up the money they otherwise would spend on cigarettes in order to begin purchasing the patches on their own, she said.

Some tenants, obviously, were upset by the new no-smoking rule, but she is not aware of any who have moved out specifically because of it, said Irizzary, the regional property manager.

She said others, who prefer not to be exposed to second-hand smoke, are happy about the new rule.

“They have people who are on oxygen. There are cancer survivors. There are children with asthma,” Stuchin said.

In apartment buildings, cigarette smoke can travel under door ways and through air conditioning and ventilation systems, Wright said.

“It’s really a positive thing. We understand that some of the residents who are smokers may not be so happy about it, but it really is in their best interest,” Irizarry said.

“A smoker can be on the property. They just cannot smoke,” she said.

Some private apartment complexes in the region also prohibit smoking.

Initially, it lost some potential tenants because of the policy, but the prohibition is becoming more widespread in the housing market, Hoffman said.

“I think it’s gone to a positive as far as marketing,” he said.

Schermerhorn Properties, which has apartment complexes in Queensbury, Moreau and Kingsbury, prohibits smoking at its senior housing complexes, but not at any of its general properties, said developer Richard Schermerhorn.

Seen on: The Daily Gazette Tuesday, September 10, 2019 Industry says problems due to illegal vaping products CAPITAL REGION — Calling it a “frightening public health phenomenon,” Gov. Andrew M. Cuomo on Monday directed the state Department of Health to address both the increasing number of cases of vaping-associated respiratory illnesses and the growing use of vaping products by END_OF_DOCUMENT_TOKEN_TO_BE_REPLACED

(Alexandria, VA) – Two significant studies released this weekend showed continuing problems of legalized marijuana in Colorado and Washington State. The first study, published in the Journal of the American Medical Association, found that marijuana poisoning cases among children in Colorado has been rising an average of 34 percent per year — almost double the average 19 percent annual END_OF_DOCUMENT_TOKEN_TO_BE_REPLACED

Governor Andrew M. Cuomo today launched “Combat Heroin,” a campaign designed to inform and educate New Yorkers about the risks of heroin and prescription opioid use, the signs of addiction, and the resources available to help. “Heroin and opioid addiction has impacted families in every corner of our state and stolen the lives of too END_OF_DOCUMENT_TOKEN_TO_BE_REPLACED

By Lauren Mineau for The Saratogian>> July 15 is a special day for Ballston Spa resident Sean Kelleher. He’ll be three years sober and attending a film screening at Bow Tie Cinemas that he brought to life. “The Anonymous People,” a film on the reality of addiction is being brought to the Spa City at END_OF_DOCUMENT_TOKEN_TO_BE_REPLACED

Photo: MarkBolles.com Story by Arthur Gonick, Saratoga Today NewspaperSARATOGA SPRINGS— We tend to wax romantic about our community. And in truth, compared to other communities, we are relatively safe. As such, we sometimes fall into an illusion that we are insulated from the worst of society’s ills. But at street level, there’s no such illusion. END_OF_DOCUMENT_TOKEN_TO_BE_REPLACED